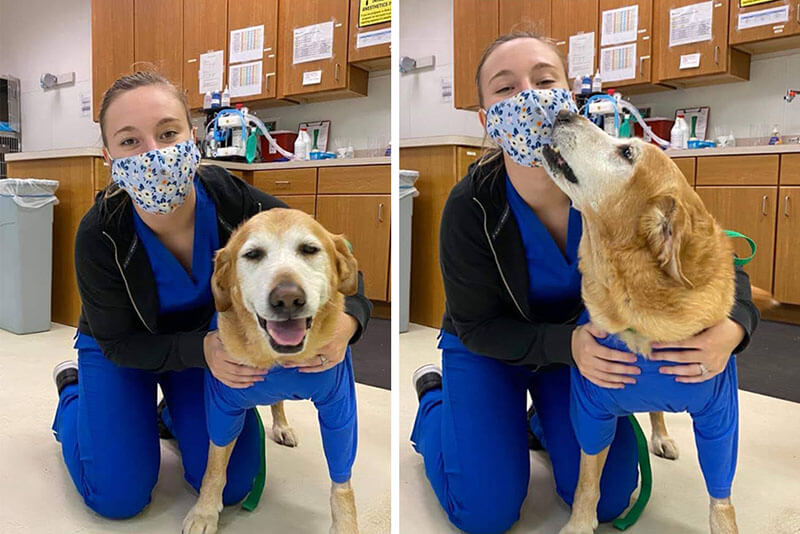 Warning: The following contains post-op pictures that are graphic. Though the purpose is for educational reference, viewer discretion is advised.

On September 8, 2020, Copper, a very sweet golden retriever, underwent surgery at Pets In Stitches to have a very large mass on the side of his abdomen removed. The mass was folding over, causing the skin in the folded areas to become infected. Unsure whether the mass was malignant or benign, these concerns were accentuated by its continued growth and the possibility of rupturing. Thanks to a referral by Dr. Sue Rancurello, we were able to help him out.

Typically, when a mass cause is unknown with the possibility of being a malignant cancer, we aim to remove 2 cm of grossly normal tissue around the mass itself. Because of the abnormally large size of Copper’s mass, his surgical wound was approximately 6 inches by 5 inches—not a situation commonly encountered.

When wounds are closed, many aspects are important to facilitate healing—one being lack of tension so wound edges stay together as they heal. Copper’s wound edges could not be pulled together without extreme tension. We chose to create a reconstruction flap from nearby skin to close the wound with minimal tension. 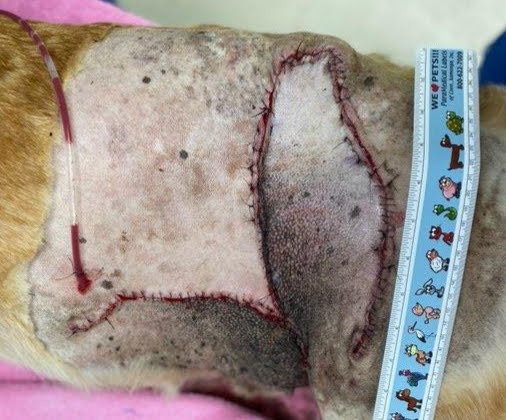 It can be challenging for owners when the course of action unexpectedly changes, but Dr. Rastetter spoke with Copper’s pet parents extensively after surgery—even sending pictures—to prepare them to see their beloved family member later that day.

Because of the extensive surgery, we were concerned about Copper’s post-operative pain control being more than what could be handled with oral medications only. After discussion, Copper’s pet parents followed our recommendation and admitted Copper at MedVet for overnight care until his pain was able to be managed exclusively with oral pain medications the next morning.

Copper was rechecked on September 11th and unfortunately, half of the reconstructive flap was dying. The dead tissue would need to be removed, but we waited a few more days to make sure the live and dead tissues were clearly identified. 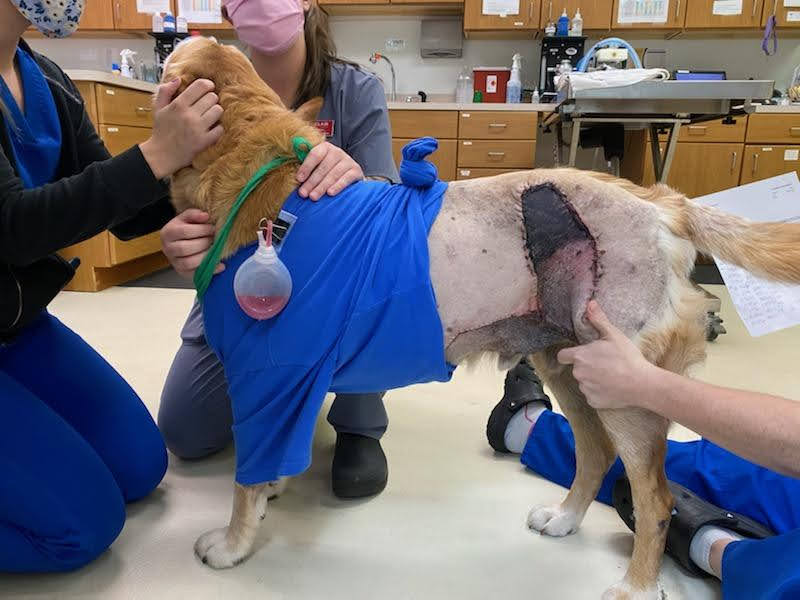 On September 21st, our team removed the dead tissue with the assistance of local nerve blocks. The open wound was bandaged carefully to facilitate healthy tissue growth. That evening, Smith Farm donated raw honey, which has antibacterial components, for Copper’s healing process. The next day, honey was applied directly to his wound and bandaging continued. The brave pup responded dramatically to the honey, as you can see with the subsequent wound pictures: 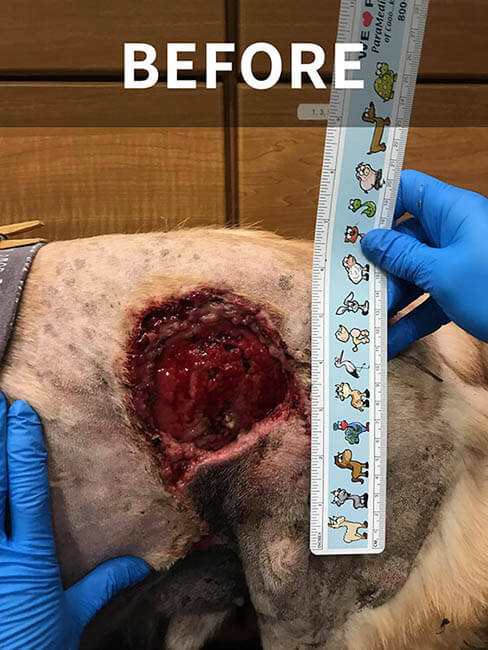 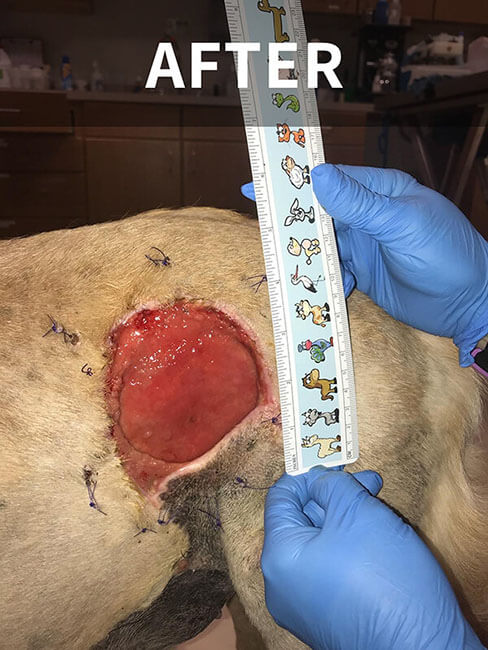 The nice, pink tissue is called granulation tissue and it’s exactly what you want to see during the healing process. Wounds that size can heal on their own, gradually constricting from the outside inwards, which is called second intention healing.

The histopathology report finally arrived and informed the official “Copper Fan Club” that the mass, while serious, had been completely removed during surgery—a much-needed bright spot in the midst of all the frequent rechecks and bandage changes!

However, a wound pocket was eventually identified and our team knew that it wouldn’t be able to heal through second intention healing. So, a second surgery was scheduled for October 6th. We explained to Copper’s parents that the goal was to fully close the wound, but the main surgical goal was to eliminate the pocket, which would allow the entire wound to heal via second intention healing. Steps to reduce tension on the closure allowed apposition of the wound edges. One specific area still had significant tension, so Copper’s parents and Dr. Sue were informed that the area may open. And of course, over the next few days, it did indeed open. Still, the wound was much smaller than before the second surgery and Copper was on a good path! 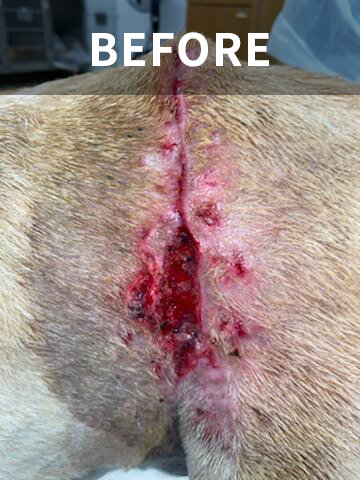 November 11th was Copper’s final recheck examination and he was fully healed! Time will continue to strengthen the scar. Copper’s situation took nine weeks to heal and be released from care after his initial surgery. Gosh, it is frustrating when medical care doesn’t go according to plan—for both pet parents and veterinary teams! Our entire team at Pets in Stitches is so grateful for the patience Copper’s pet parents displayed and their willingness to work with us.

Dr. Rastetter learned a great deal from our experience with Copper. We had several surgeons, on both the human and veterinary side, offered guidance and suggestions to manage Copper’s healing and also prevent similar hurdles in the future. She learned more about improving communication with pet parents regarding unexpected surgical needs such as reconstruction flaps, multiple rechecks, bandage changes, and pain control.

All that being said, Pets in Stitches came away with a couple of lessons:

In the end, Pets In Stitches is committed to seeing our patients through their care, whether it’s in-house, via referral, research, or any combination.

Critical Mass: All About Bumps in Pets

Taking Your Lumps: All About Pet Mass Removals