Tattooing My Pet When Spayed or Neutered? Why?! 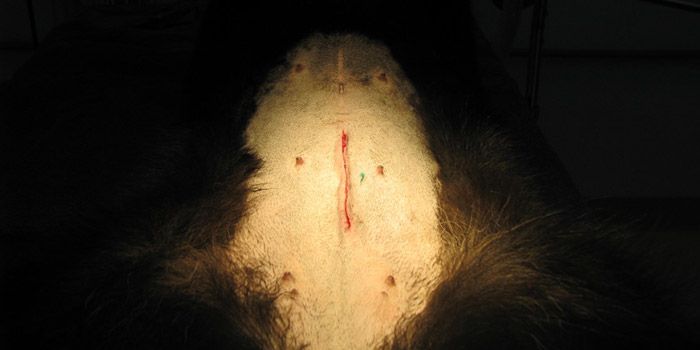 If your pet is spayed or neutered at Pets In Stitches, you’ll find out that we tattoo after surgery. Why though? It’s pretty simple… to save lives and prevent future surgeries.

Scars left from a spay can be fairly small and slight – difficult to differentiate a scar from a spay, a healed scratch, or pigment change. One may think that that absence of testicles confirms a male is neutered but some males have retained testicles which are not in the scrotal sac as they should be. A tattoo lets the world know 100% that a pet is not able to have or contribute to puppies or kittens.

The sad fact is that shelters, rescues, and humane societies have limited income. Some decide which dogs or cats to offer for adoption based on the cost of their care. If they have to spay or neuter, that pet will cost the organization more money than one that is already fixed. A tattoo can decrease the risk of euthanasia and increase acceptance into an adoption program if the dog or cat is found as a stray later.

Some compassionate individuals find a dog or cat to which they open their home. The finder has no information about the adopted stray’s surgical history. Maggie was one such cat earlier this week. We shaved her belly to determine if Maggie was spayed. The finder had not seen any signs of being in heat. A very light small white area was seen in the appropriate place for a spay incision but the mark was very slight. We just did not have that “DEFINITELY SPAYED” feeling. Due to the uncertainty of Maggie’s spay status, her new caretaker elected to proceed with a surgery to either spay her or determine she was spayed. During surgery, Maggie was found to have been previously spayed. Thus, Maggie had been placed under anesthesia and undergone surgery unnecessarily in addition to the unnecessary medical costs incurred by the new owner. This is such a frustrating situation for the caretakers and Pets In Stitches staff! A tattoo would have prevented this scenario.

As a side note… Maggie was tattooed after her surgery… we now knew 100% that she was spayed. 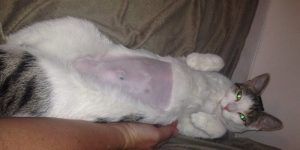 So, Pets In Stitches tattoos all our sterilized dogs and cats. It’ such a good feeling when we shave a stray pet and do find a tattoo! The tattoo is doing its job.

If your pet isn’t microchipped and you aren’t having your dog or cat spayed or neutered at Pets In Stitches, ask your veterinarian to tattoo!

The Down and Dirty on Ear Tipping in Cats